Its the summer of 1974 in Wilkes-Barre, PA. The last member of generations of Stegmaier family brewers has inherited a growing number of liabilities, and a severely shrinking cash flow. Time comes when he cannot pay his loyal employees, and he is forced to close the brewery. Lion, the other local brewer, buys the brand and the business, pays off the back wages, and in anticipation of new volume, hires as many of the
old Stegmaier employees as his smaller operation can possibly handle, and starts to brew Stegmaier beer with only a little time lost. Sounds like a pretty good deal all around, at least much better than what happened at so many other local breweries in towns and cities of all sizes. Employees get paid, most of them are rehired, the city keeps a beloved beer brand still brewed locally, and the other local brewer does as much as possible to save a competitor. Sure beats the Grain Belt story, doesnt it?

Its now December of 1974. Al Kogoy, a Union Organizer for the United Electrical Workers, comes back home to Wilkes-Barre for Christmas after six months assignment in the South. He walks into his favorite tavern, and is greeted enthusiastically by the owner, a friend of years standing. The bar has always been “a Stegmaier House”; it co-sponsors sports teams with the brewery, features Stegmaier products exclusively on draft, has been a friend and customer for generations. “What are you drinking these days?” Al is asked. “Steg, of course” is the reply. “Al, you don’t want to drink that anymore. Its different!” Al insists, and a draft is drawn from the one remaining Stegmaier tap of the four behind the bar…the others are National brands!  You know, B and M and the like, brands that the owner would only reluctantly serve in bottles to out-of-towners before. When he asks for a second beer, the response is even stronger. “Al, its not the same! Its different!  You DON’T want to drink it any more!”  Figuring that maybe 6 months away has dulled his taste, but finding the beer tasted pretty much the same as always, and certainly like he was home, asks: “Whats different? Still tastes good to me!” He is told: “Al, it isnt the same. It isnt family anymore!
What about your LOYALTY?” Hmm; still brewed locally, by as many of the same Union employees as was humanly possible, but by another local brewer. Oh yes, the other brewer was The Lion Brewery of Wilkes-Barre, who had been Stegmaiers rival and brewed Gibbons beer. Al doesn’t understand even today. Loyalty?

Its now some years later, at a special City Council Hearing called to decide the fate of the old brewery buildings, now run-down and vandalized, but still a dominant feature in town. Several square blocks of dark red brick structures in classic late 19th century style, empty and moldering. There had been all kinds of proposals to reuse them; the same condominium or industrial park ideas tried elsewhere had failed to find funding. Now the Council was faced with a quandary. They didn’t have the money either way, but it would cost about two million dollars to stabilize the buildings, and about the same to raze them. Al sat in the Hearing listening to impassioned pleas by the historical society, and other preservationists of all stripes, until it was his turn to speak. As a loyal customer, and a life long Wilkes-Barrean, and a collector of Stegmaier memorabilia, Al told the Council what the place meant to him, and to other citizens, and ended by saying “You CAN’T tear it down!” Afterwards, he went home, and read in the newspaper the next morning that the council had voted to tear it down. Politics! 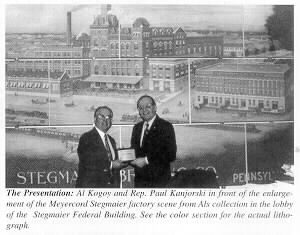 It is now February 17, 1998. Al stands in the restored lobby of the main Stegmaier Brewery building, being dedicated today as the Stegmaier Federal Building! He looks across the large lobby at a huge 12 piece enlargement of the Stegmaier factory scene from his collection. He holds in his arm a plaque from the ABA that he will present to his US House of Representatives Member Paul Kanjorski who spearheaded the renovation, and whose local office is now in the cupola of the building. One could almost say that this scene is a VICTORY, but Al feels a bit strange. There are now probably more people working in the brewery than there were when it WAS a brewery, as the major client is a high-tech operation of the US Post Office. But the wonderful malt smell is gone, as is the Hospitality Room. The Lion (corporate successor to Gibbon, but still brewed in the same, but greatly modernized plant on the North side of town) still brews Stegmaier Beer. Al still occasionally visits his old favorite tavern, but since that Christmas, things arent the same anymore. A Brewerianist with a dream kept pushing and prodding until things began to fall in place, and today, he stands in the middle of a dream come true. I guess Al Kogoy should be happy to be a “hero”; he was instrumental in saving one of the best-known Wilkes-Barre landmarks for his town, and for all architectural and breweriana fans for years to come. Is Al happy standing there in the old/new lobby? Yes sir, he is! But the joy is tempered with a sweet sadness. A victory indeed, but maybe with a small “v”. 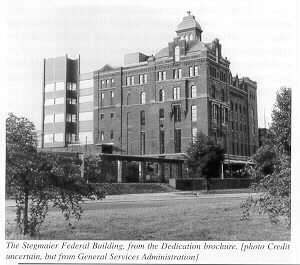 When Al told me the first two parts of this story at the annual Blue and Grey Meet in Fredericksburg, Va. the weekend before the dedication, there were often tears in his eyes. Al is still a Union man through and through, but he does fully appreciate what The Lion Brewery did for the employees when they paid up the back wages, and hired most of the Stegmaier people! He still doesnt understand his friends “loyalty”, and Al’s confusion was eloquent enough that I really feel his pain and bafflement myself. I started writing this story in my head that very night. I got to know a man that Saturday night, and hope this breweriana story conveys some of what I learned. Credit for helping raise local awareness must go to ECBA, who held two Conventions (1983 and 1993) in Wilkes-Barre, and to ABA that held one there in 1995; these events
certainly helped to save the Brewery, with demonstrations on Public Square, TV appearances and the like. Ive kept most of the other names out of my telling. It is Als story. My friend, small “h” hero and small “v” victory or no, you have left a big piece of your heart in that lovely old building! That kind of loyalty we all can understand! Many others have likely already expressed their praise and thanks to you. From all the people your dedication has touched, the strongest possible statement of Congratulations and thanks are in order.

This article was reprinted with the permission of NABA and was origionally published in the 1998 Spring issue of The Breweriana Collector; quarterly journal of the National Association Breweriana Advertising and written by Fil Graff, Editor of the publication.