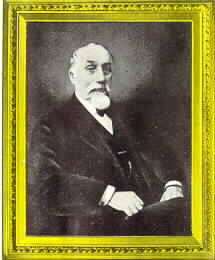 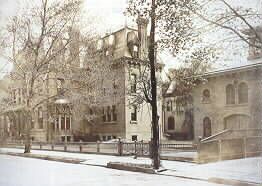 Stegmaier of Wilkes-Barre: by Ruddy Hechler, published in the Fall 1987

If breweriana collectibles are your pleasure, the Stegmaier Brewing
Co. of Wilkes-Barre, PA. Could be a one-stop shopping center for
outstanding advertising. Collectors can give thanks for that day in 1857
when Charles Stegmaier set up shop in the Northeastern Pennsvlvania town.
He started with a bottling business and by the turn of the century had the
largest brewing business in Pennsylvania outside of Philadelphia and
Pittsburgh.

Charles Stegmaier, born October 7, 1821, learned his trade in his
home area of Wurtenberg, Germany. At the age of 27, having been brewmaster
at several large local breweries, he set sail for America. He quickly
found employment at the small Corporation Brewery in Philadelphia. Shortly
thereafter, he gained employment with the Louis Bergdoll brewery, where he
met John Reichard of the Reichard & Weaver brewery in Wilkes-Barre.
This friendship of 1851 sent Charles packing on a 120-mile trip upstate,
where he and John formed a short-lived partnership. This business
association produced the first lager beer in their section of
Pennsylvania. A longer partnership was also formed in 1851 when Charles
married Catharine Baer, daughter of George C. Baer.

Several years later, Charles accepted a position in Pottsville with
the George Laurer brewery, but he returned to Wilkes-Barre in 1857 to
establish a bottling business. He quickly formed a partnership with his
father-in-law, George Baer, to build a small brewery on South Canal
Street. They brewed with a wooden kettle and stored their beer in an
abandoned coal mine tunnel while a new brewery with underground vaults was
built on East Market Street. The new Baer & Stegmaier Brewery was
opened in 1863 and lasted until the Panic of 1873.

Out of a job, Charles entered the hotel business for two years
before buying the Joel Bowkley Brewery on North River Street at the Canal.
Forming a partnership with his son, Christian E. Stegmaier, he
successfully increased business to the extent that they could repurchase
the Bear & Stegmaier Brewery in 1880. Output continued to grow under
the name of C. Stegmaier & Son; a new brewhouse and storage facility
were built in 1894, increasing annual capacity to 300,000 barrels. By the
standards of the time, this was an extremely large brewery. Charles and
Christian incorporated the firm in 1897 as the Stegmaier Brewing Co.
Charles, who continued active management of Company affairs until 1902,
operated the firm with Christian and his other sons, Fred and George. The
Stegmaier family were highly esteemed as citizens of the city; they were
extremely charitable and contributed greatly toward the growth and
development of Wilkes-Barre. Success this time was not short-lived; the
company enjoyed many productive years before closing during long years of
slow decline of the local brewers in October, 1974.

Between 1910 and 1913 Stegmaier won eight gold medals at
expositions in Paris, Brussels and Rome. After prohibition it became one
of the largest independent breweries in North America, reaching an output
of a half million barrels in 1940. Using a 60-truck fleet and rail
services, the distribution areas eventually covered the East Coast from
Maine to Florida – a considerable evolution from the days of 1857 when
Charles Stegmaier personally delivered each barrel of beer with an express
wagon drawn by a husky goat.

The sudden announcement in 1974 by Edward R. Maier, great grandson
of Charles Stegmaier, that the Stegmaier label was sold to Lion, Inc. of
Wilkes-Barre sent shock waves through the brewery’s work force. The
Company’s financial situation was known to be deteriorating, but the
notice of sale still came as a surprise to most.

The Company was a family-run business covering four generations,
always respected as a “class act” by its loyal employees, many
of whom were from families whose parents and grandparents had worked with
Charles Stegmaier. About 50 employees, along with Maier as Executive Vice
President, were employed by Lion, Inc., but some 150 workers lost their
jobs. The vacated Stegmaier brewery, purchased for back taxes in 1978, is
currently owned by the City of Wilkes-Barre. The City has hopes of selling
it to a developer who will pursue historic restoration of the buildings.

Stegmaier’s many years of brewing brought us not only award winning
beer, but a myriad of advertising memorabilia. A room of considerable size
could be filled with historic breweriana with the “Stegmaier Brewing
Co.” name appearing.

Stegmaier beer is still produced by Lion, Inc., of Wilkes-Barre,
and remains one of the firms best selling products. Enjoy a cold, frosty “Steg”
and appreciate the history that the Stegmaier Brewing Co. has left behind.

If you have any tidbits of information on beer history or collectibles, contact us! We will publish your articles and give you full credit!

For you UK beer drinkers, you can play at https://promocodeladbrokes.co.uk and find details on all the Ladbrokes welcome bonuses.