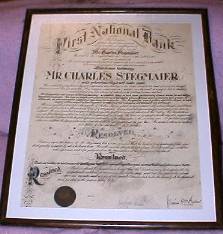 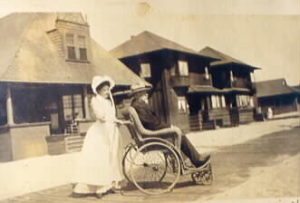 of this bank have received

with sorrow the sad intelligence of

the death of one of their member

testimony of our regard for our departed associates.

This is our tesimony

was preeminently a self made man

He worked his way from a humble apprentice in a
brewery in his native land to the head of one of the largest breweries in
our commonweath. His business success was not sudden, nor the result of
accident, but it steadily increased and was the outcome of orderly and
sterling business methods.

Mr. Stegmaier was a man of sterling honesty. A
splendid judge of men, more particularly of men whom he met in the line of
his business. He was as simple and unpretentious in his habits when a
Prince among brewers and a man of affluance, as when a humble apprentice
learning his business. Mr. Stegmaier was a public spirited citizen, he had
no peer in his respect in the City where he had lived his best years and
amassed his fortune.

He was greatly interested in the growth of
Wilkes-Barre. which he had watched with interest from a small town of 1500
inhabitants to a flourishing City of 65,000 people. Every local enterprise
expected and received his hearty support. He was benevolent and gave
largely but quietly to all the organized charities of the Valley. His
benefactions were multitudinous and known only to the recipients of his
bounty. He had no sympathy for sturdy idle vagabonds, but his big heart
opened to the deserving poor as naturally as the flowers open to the
morning sun. No faithful employee of his ever suffered the pangs of
poverty or was compelled to seek protection of the poor laws. He cared for
them as tenderly as a father for his children; be it therefore

That we regret the decease of Mr. Stegmaier, but we
are consoled that he lived a long and useful life, and died greatly
respected by all who knew him. We will miss his pleasant face at our board
meetings, and his rich experience and ripe judgment in the transaction of
the business of the bank.

That we tender to his bereaved
family our heartfelt sympathy in the great sorrow that has fallen upon
them.

Resolved, That we attend his
funeral in body, that the Directors wom be draped with the appropriate
emblems of mourning for thirty days and that this tribute be entered upon
our minutes and a copy of the same be transmitted to the family of the
deceased and printed in the papers of the city.